Heute wenden wir uns an unsere Freunde auf der Insel und switchen daher die Language: David Cameron, Prime Minister of the once Great Britain, wants to end end-to-end encryption once and for all. But don't take it personally: Cameron is not interested in your babbling at all. He just doesn't want safe places where terrorists can communicate - like houses in Birmingham or the Streets of Bradford. 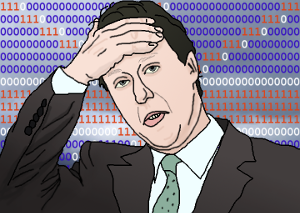 Now, it's obvious - even for a Tory - that tearing down all houses of Birmingham and eradicating all streets of Bradford might get noticed - even during the summer holidays - and we certainly don't want that. People might start to ask questions or - even worse - feel annoyed because of all the ruckus. And so the much loved Prime Minister, best known for his excellent choice of words and great understanding of everything technical (apparently he called Angela Merkel to ask what this "Neuland" was about), decided to go for the throat of encryption (again).

Six months after his latest attack - which left him looking like a complete idiot - searching Google for "complete idiot" shows David Cameron on the first page as result number six - the Prime Minister is all for encryption. But it has to be a weak encryption or maybe a slightly better one if the backdoor is large enough and adequately lit. An encryption that police and secret service - and every crook from Aberdeen to Zytkavicy - can easily break. Something like the brilliant export-grade ciphers the US administration brought us back in the 90s, a weakness still plaguing numerous systems.

It comes of no suprise that David Cameron is talking bloody nonsense but it is a real suprise that nobody seems to be listening anymore. The rest of the EU is completely obsessed with Greece, running around like a flock of headless chickens throwing Euro bills all over the place. I'm not sure that anyone would notice Cameron dropping the Pound in favour of the Euro right now and so his statements about the ban of secure encryption go unnoticed. But we've heared you, Prime Minister! And we comment that your ideas are an utter pile of garbage (again).

Dear people of Great Britain: It's good to know that you fought Hitler and the french coup to end the freedom to photograph - but now you have to fight for your freedom to have privacy and encryption!
. Tails . Linux . USB . CD . Secure Desktop . IRC . Truecrypt . Tor .
Nach oben
Antworten
1 Beitrag • Seite 1 von 1